South Africa’s largest manufacturer of printed circuits, Bosco Printed Circuits, has eliminated twice a week power cuts that had disrupted production, delayed deliveries and cost more than 100,000 rand a year by deploying Redflow ZBM2 zinc-bromine batteries. Bosco has also reduced its electricity costs by minimising grid use during peak demand periods in the morning and evening – when charges increase by 300-400 per cent – by running the production line on solar-generated energy and off-peak power stored in its 14 ZBM2 batteries.

South African manufacturer Bosco Printed Circuits had a big problem. The company, located in the northern industrial city of Johannesburg, often had its production line stopped by sudden power cuts.

Power cuts caused by an unreliable electrical grid could happen as often as twice a week, imposing a heavy cost on Bosco in lost production. Tolerating this situation was untenable for Bosco, South Africa’s largest manufacturer of printed circuits, which serves many customers in the Mining, Security and Industrial electronic industries.

Bosco Printed Circuits Director Mr Philip Verheul said the company installed the Redflow batteries to avoid loss of production. “In our process, we have electroplating lines in which we plate copper in holes, so if there’s a power failure during the process. everything in the line is basically scrapped,” he said.

“Stoppages could cost as much as 10,000 rand (A$1000) each. Even more of an issue was we lost our delivery time, which created inconvenience and concern for our customers, who depend on us.”

Today, Bosco’s production line can continue working uninterrupted if mains power drops out as the ZBM2 batteries automatically supply energy to the production line. The company has also configured the system to provide energy to its front office, so power cuts do not disrupt Bosco’s commercial and head office activities.

Even as the grid power supply has become more reliable, the Redflow-based energy storage system has continued to pay for itself by allowing Bosco to avoid buying mains-supplied electricity during peak demand periods. During these morning and afternoon peaks, electricity charges can increase by 300 to 400 per cent.

Bosco avoids these punitive costs by charging its Redflow batteries from solar panels during the day and with low-cost power available from midnight to 6am. The company then runs its critical electroplating production lines primarily on battery power from 7-10am and from 6-8pm, saving more than 55,000 rand (A$5500) a year in electricity charges. “We are seeing savings because we use the batteries to supply power during the most expensive time of the day,” said Mr Verheul.

The Bosco system orchestrates this complex daily cycle of energy optimisation using the Victron CCGX and the Redflow Battery Management System (BMS), which enables Redflow to monitor and manage the battery performance from Australia.

Mr Verheul said Bosco had selected Redflow’s ZBM2 batteries because of their unique benefits. “When we looked at lead-acid and other batteries, their lifetimes were limited,” he said. “We decided to spend a bit more money to go the Redflow route. Its ZBM2 batteries are long-lasting, with a 10-year or 36,500kWh warranty, they work well even in hot weather, and they are easily recyclable.

“We are very happy with these batteries, which keep getting better over time. I have to commend both Redflow and Specialized Solar Systems who have been fantastic.” 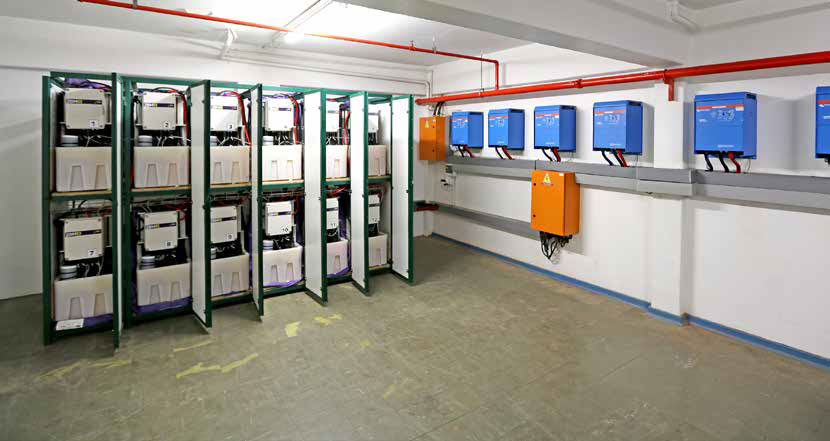 “We are seeing savings because we use the batteries to supply power during the most expensive time of the day... we are veryhappy with these batteries, which keep getting better over time.”