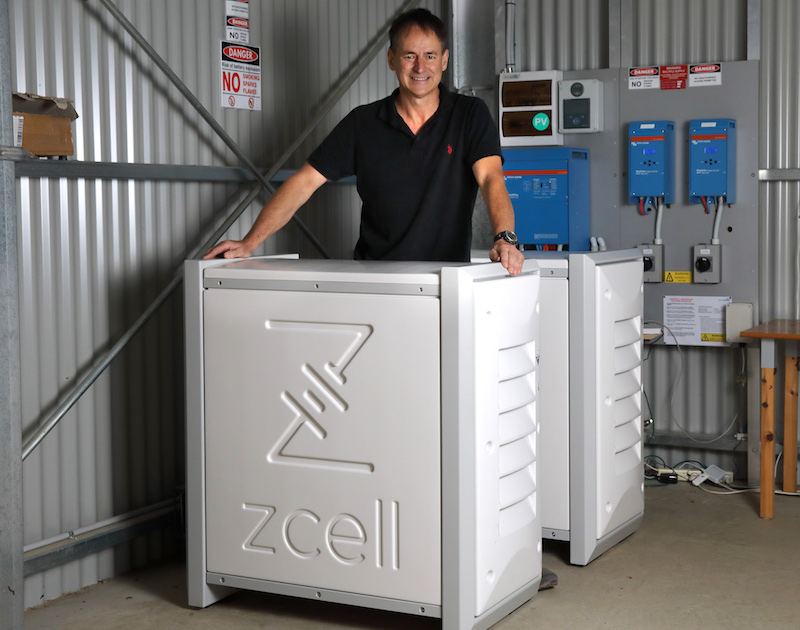 Pictured above: Alan Noble with his ZCell batteries at his Willunga property, south of Adelaide

Prominent Australian technology executive Alan Noble required an all-season, highly reliable energy supply at his family-owned property near the South Australian town of Willunga, to guarantee water pumps would work on high fire-risk days in summer. Faced with a very high price to extend mains power across the hilly 100-hectare block, plus the expense of ongoing electricity bills, Mr Noble decided to deploy a more cost-effective off-grid energy storage solution based on two ZCell batteries that can store 20 kilowatt hours (kWh) of energy – eliminating power bills for the property entirely.

Alan Noble, Engineering Director for Google Australia and New Zealand, installed a ZCell-based energy storage system at his Willunga rural property in South Australia in the middle of 2016. Integrated by Off-Grid Energy Australia, the system is powered by 24 Australian-made Tindo Solar panels on the roof of a large implement shed, connected by two Victron battery inverters.

Faced with a very high price to extend mains power from one corner of the property across the hilly 100-hectare block, plus the expense of ongoing electricity bills, Mr Noble decided to deploy an off-grid energy storage solution based on two ZCell batteries from Redflow that can store 20 kilowatt-hours (kWh) of energy. As well as costing a fraction of the price of installing mains power, the decision has eliminated power bills for the property entirely.

Mr Noble said he chose ZCell because of its flexibility, safety and affordability. “We wanted the flexibility to build anywhere on the site without having overhead power lines,” he said. “Secondly, we have power when we need it. If there is a bushfire here, we can power our pumps properly whereas electricity distributor SA Power Networks has a policy of actually shedding power during high bushfire-risk days, so precisely when you need the power, they shut it down. Without the ZCells, we’d be running around trying to fire up generators during hot days, which is not practical.

“Also, we want to make this property as automated as possible. I want it so we can move water automatically, based on the power to turn on pumps, to turn on sprinklers and turn on any fire defences. We can only do that if we have our own on-site power. Last, but not least, I really like the idea of being self-sufficient. The way I see it, grid power is getting more and more expensive, so this is an investment that in the long term is going to be worth it.”

Mr Noble said he had preferred Redflow’s ZCell zinc-bromine flow batteries over lithium-based alternatives for two reasons. “Firstly, ZCell can cope with a high heat environment, which is not true of a lot of batteries,” he said. “It does get hot here in the summer as the shed is not air-conditioned. Also, about having power when you need it most, I want to make sure my batteries are working on those extreme heat, high bushfire-risk days.

“The other benefit is that ZCell can just sit there. Conventional batteries don’t like being fully discharged. Longer term, that’s less of an issue, but over the next couple of years, while we’re not living here full-time, it’s nice to know that I’m not going to destroy the batteries if they’re fully discharged. They’re also relatively compact batteries too, so they don’t take a lot of space. Ease of use is a nice factor with ZCell. It’s all very easily managed through the BMS (Battery Management System), both on-site and through the Internet.”

Redflow has also configured Mr Noble’s ZCell system to re-charge automatically from a zero state of charge without requiring an external source, such as a diesel genset. This capability is valuable where power is not required 100 per cent of the time – such as at weekender properties. ZCell batteries are unique in their ability to remain undamaged or unstressed after discharging all their energy, even for an extended period. By contrast, lithium-ion batteries are ‘bricked” by total discharge.

“ZCell can cope with a high heat environment, which is not true of a lot of batteries.”