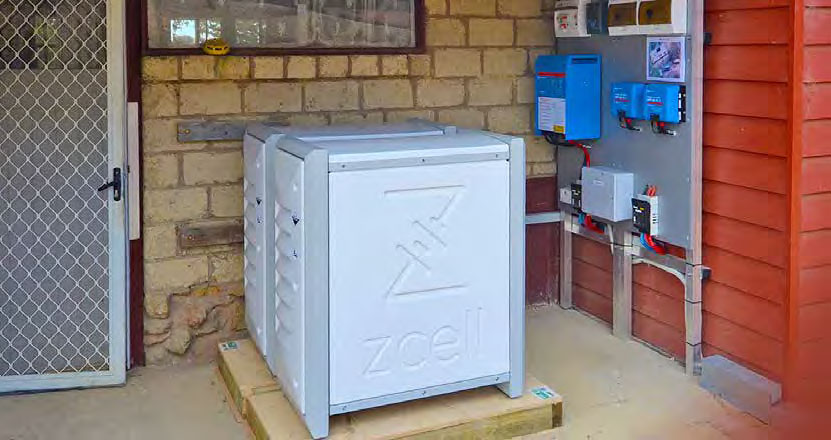 Sound engineer Adrian Shand and his partner live in an old central Victorian stone cottage that is completely off the grid. Using two ZCell zinc-bromine flow batteries, powered by 21 PV solar panels, the Redflow-based energy storage system allows the couple to maintain a “city lifestyle” in the country, without “calorie counting” their energy use. The ZCells, which store a total of 20 kilowatt-hours (kWh) of energy, can charge fully in just four hours on a sunny day. ZCells also deliver consistently clean power that does not interfere with Adrian’s musical equipment.

Adrian lives with his partner in an old stone cottage at a property surrounded on three sides by state forest, near Glenlyon, north-east of Daylesford, in central Victoria. The couple – self-declared “tree changers” who own energy efficient appliances and have insulated the cottage’s roof – have managed to maintain their city lifestyle in the country, using multiple computers and professional musical amplifiers which Adrian requires for his sound engineering work.

Although the cottage had existing solar and a lead-acid battery when they moved in, Adrian and his partner decided to upgrade both the solar panels and the battery to make the property truly grid-independent without heavy use of a diesel backup generator.

The couple selected ZCell batteries, installed by Off-Grid Energy Australia, because of their superior performance, including the ability to discharge all stored power without damaging the battery and to retain the full 10 kWh storage throughout its warranted 10 years or 36,500 kWh of storage. The entire energy system cost about $56,000 – about one quarter of the $200,000 cost of connecting mains power to the property. It also means Adrian never receives another electricity bill.

Adrian said they did not want to “calorie count” energy usage at their home. “Redflow gives us the confidence to turn on appliances at night, so we’re not afraid to do loads of washing after the sun has gone down,” he said. “We’re not draining the battery wildly.”

Adrian’s house generates energy from 21 photovoltaic solar panels on the roof of a nearby shed generating 5.2 kilowatt peak (kWp), which can fully charge both ZCell batteries in four hours on a sunny day. The ZCells, with a total storage capacity of 20 kWh, replaced the 1.5 kWh lead-acid battery, which required a backup diesel generator to supplement it every couple of days during winter.

Adrian said the upgraded storage capacity had a dramatic impact. “Now, we only use the backup generator occasionally, if there are a bunch of cloudy days in a row,” he said. “Even in the dead of winter, we can charge the ZCells on a sunny winter’s day, getting both batteries to at least 70 per cent. We might use 50 per cent of one battery in our standard overnight load, so the system gives us at least two full days of autonomy.”

Adrian said he chose Redflow’s ZCell batteries because of their superior energy storage technology. “It is 100 per cent based on the chemistry, which is far and away better than anything else,” he said. “Our main criteria were stability and getting the most bang for buck, the most energy that we could get for the least money. It wasn’t necessarily a per kWh cost, it was more the performance and longevity of the battery. We live off-grid, so we need every drop of power we can generate with no degradation over the years.”

Another reason is that Adrian plans to build a digital editing and mixing studio at his home, for which he needs “clean consistent reliable power”. “These batteries will deliver clean power for when I have people bringing $10,000 amps into the studio,” he said.

Adrian said the ZCell batteries and Victron battery inverter were easy to operate. “Redflow and Off-Grid Energy have been great at supporting us,” he said. “They keep improving ZCell which is now brilliant.”

Download the full case study about this ZCell installation by clicking here﻿.

“We need clean consistent reliable power. These batteries will deliver clean power for when I have people bringing $10,000 amps into the studio.”