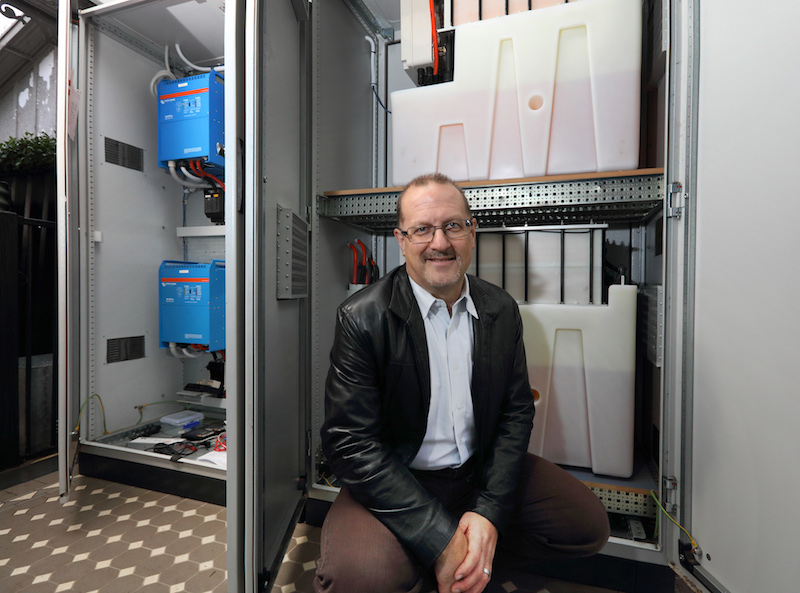 Pictured above: Simon Hackett with his Redflow battery system

Simon Hackett is a man who likes to walk the walk as well as talk the talk, so the Redflow CEO was an early adopter of the Redflow-designed zinc-bromine flow battery that is at the heart of the ZCell residential energy storage system. At his eastern Adelaide home, Mr Hackett installed two Redflow batteries in early 2016, replacing a pair of ageing lead-acid batteries. As well as slashing energy consumption in his home, Mr Hackett saw the batteries power his household through a state-wide grid blackout in September that year without his family even noticing the power outage.

When 1.7 million South Australians lost power in late September 2016, the family of Redflow CEO Simon Hackett in eastern Adelaide learned of the state-wide blackout by reading about it on social media.

As the State’s electricity grid shut down to protect itself during a fierce storm, two Redflow batteries at the Hackett house continued to operate, providing it with electricity, without missing a beat.

Mr Hackett said the two Redflow zinc-bromine flow batteries had worked as intended. “They kept our lights on as the rest of the State was plunged into darkness,” he said.

Mr Hackett said the system had performed well since it was installed. “On a sunny week, most of our home’s electricity is provided by solar energy, both directly and indirectly, by using the Redflow batteries to time-shift stored energy,” he said.

“Like a home rainwater tank saves water, this system acts as an electrical energy buffer, reducing the use of grid energy where possible and prioritising the use of battery energy.

“Of course, in weather conditions with less sunshine, we use more grid energy. The system automatically reverts to off-grid mode if the grid is unavailable, including recharging the batteries from solar energy to help support loads in the home for extended periods during such outages.”

Installed by Redflow partner Solar Depot, the Redflow batteries at the Hackett household use the ZCell battery management system, so they can be monitored and managed remotely via the Internet from a smartphone or computer.

“On a sunny week, most of our home’s electricity is provided by solar energy, both directly and indirectly, by using the Redflow batteries to time-shift stored energy.”